BIRN has obtained the contents of the three so-called ‘agreements’ signed by Kosovo authorities to develop transport links with Serbia.

The documents relate to the so-called ‘agreements’ to establish better transport connections between Kosovo and Serbia by air, road and rail, which were signed under the auspices of US Special Envoy to the Kosovo-Serbia Dialogue Richard Grenell on February 14 and January 20 respectively.

Part of these documents have been leaked before in the Kosovo press, but the civil servants  that are signatories to these agreements and the Office of the President have not previously made the full documents available to the public.

The ‘Letter of Intent to Establish the Belgrade-Pristina Special Air Route (BPSAR)’ is dated January 20, 2020 and appears to be signed by Eset Berisha of the Kosovo Civil Aviation Authority, although no name is provided below the signature.

It states that the Civil Aviation Authority in Kosovo, the Airport in Prishtina and the NATO Mission in Kosovo express their intention to establish “the direct Belgrade-Pristina Special Air Route (BPSAR).”

The letter also reveals that consent will be required by Kosovo institutions to issue registration and the necessary permits, but that these should not be withheld if Eurowings or a carrier of the Lufthansa Group is able to present “typical and relevant aircraft documentation.”

There are also stipulations regarding taxes that can be applied to the flight. “Institutions in Kosovo confirm that the operation to/from Belgrade/Prishtina and vice versa shall operate without further additional taxes, fees and charges for a service on a BPSAR,” the letter states. “In any case fees, tax and charges shall not be discriminating.”

Prices for tickets, as well as fares for cargo and mail will be set by Lufthana, who also initialled the letter with an ‘LH.’

“Eurowings and carriers of the Lufthansa Group shall have full authority to sell tickets, define its passenger fares and cargo, as well as mail rates only for the respective services between Pristina and Belgrade vice versa,” the letter reads.

However, responsibility for implementing the flight and ensuring its safe operation lies with the Kosovo Civil Aviation Authority and KFOR.

“The Civil Aviation Authority in Kosovo and KFOR shall enter into an appropriate Arrangement governing the implementation of the BPSAR,” the letter states. “KFOR retains the authority in the airspace over Kosovo, pursuant to internationally recognized agreements on NATO’s Mission in Kosovo. At all times the Civil Aviation Authority in Kosovo, the Airport of Pristina and KFOR will ensure a safe flight operation, including landings, of the BPSAR.”

The ‘statement of intent’ regarding rail is dated February 14 and appears to be signed solely by Director of the Land Transportation Department at the Ministry of Infrastructure and Transportation, Xheme Veseli, though no name is printed under the signature. The letter also carries no letterhead or official stamps from the Republic of Kosovo.

The statement outlines plans to establish a rail corridor linking Prishtina and Belgrade, stating that “the route will connect to Prishtina via the Merdare common crossing point and will connect via the existing rail links to Nis.” It also states that in order for this to be achieved, infrastructure “must be renewed and built.”

In terms of financing, the statement advises that “Kosovo intends to seek international support and financing to make operational all railway routes linking Kosovo to its neighbouring countries.”

The statement of intent is dated February 14 and seemingly signed by Rame Qupeva, the Director of the Road Infrastructure Department at the Ministry of Infrastructure and Transportation, although his name is not printed on the document.

“For the purposes of establishing passenger and freight transport along the proposed highway, appropriate infrastructure must be developed and built,” it states. However, no details regarding financing or dates for completion are outlined in the statement.

These documents were obtained after BIRN Kosovo’s Jeta Xharra sent a number of public questions to the Office of the President, Hashim Thaci, including one about the absence of transparency regarding the transport agreements.

“If you do not make the topics you are discussing with Serbia transparent, or the letters of intent about certain agreements that you will sign transparent, (such as is the case with final deals on aviation, rail and the highway, which you have not give us access to, although we have submitted a request for access to public documents and the law obliges you to make them public), how do you expect the people to trust you?,” Xharra asked on Monday.

Full documents of the two statements of intent and letter of intent are provided below: 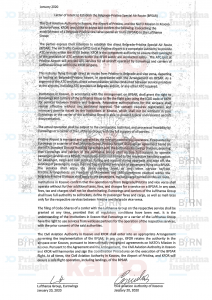 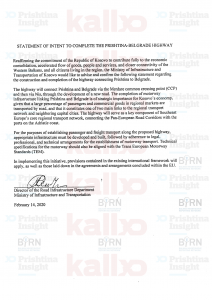 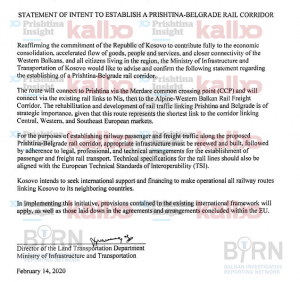