Kosovo media published Saturday an official report of the Council of the European Uni0n which refers to reaching the potential legally binding agreement on normalization of relations between Kosovo and Serbia. This report has been published after the EU foreign policy chief, Josep Borrell, hosted an informal dinner with the leaders of the Six Western Balkan countries, Gazeta Express reports.

According to this document, following the Slovenian presidency of the Council of the European Union (July-December 2021), there is a high-time to frame the potential legally binding agreement on Normalization of Relations between Belgrade-Pristina Dialogue.

The document refers also to “non-papers” recently published by media, stating that publication of these documents was aimed at damaging the political legacy of Slovenia before assuming the EU’s Presidency, writing that Slovenian legacy in the Western Balkans “is overall positive.”

The EU deems necessary that Member States support the work and the agenda of Special Representative Miroslav Lajcak and encourage Kosovo Prime Minister Albin Kurti to be more committed to the negotiation process avoiding delays, which might come as a result of local elections in Kosovo, expected to be held in autumn 2021.

“The upcoming Local Elections in Kosovo to be held in Autumn 2021, might derail the fouc of Mr. Kurti for the Dialogue Process. This development could shift the agenda and commitment into avoiding further High-Level Dialogue meetings. It is very important the EU Member States to support on the ground EUSR Lajcak’s agenda and urge Mr. Kurti to remain engaged without delays,” it is written in the report.

Additionally, in the report is written that High representative should keep pressuring specific opposition political circles in Pristina, in order to facilitate upcoming agreements and to persuade the need for a historical compromise between Belgrade and Pristina. In this report is stated that Albin Kurti’s serious commitment to continue cooperation constructively with the Specialist Chambers and Specialist Prosecutor’s office shall be highly praised within the EU. “His readiness to support the extension of the EULEX mandate is welcomed and important step that will help the Specialist Chambers and Specialist Prosecutor’s Office to fulfill their mandate in Kosovo,” it is written in the report.

In the report is written that the EU High representative Borrell shall urge the Government in Pristina against any provocative actions in the northern municipalities adding that PM Kurti shall be specifically advised not to undertake any police operation aimed at collecting electricity bills in the northern municipalities that might provoke further tensions with the local population, according to the report published by news portal Demokracia.com. /GazetaExpress/ 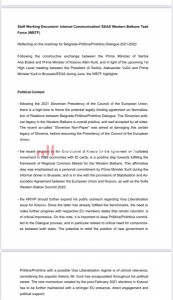 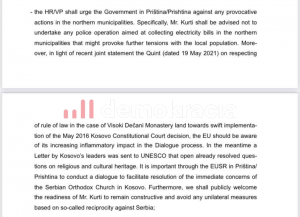