Home/Dijalog/Kosovo and Serbia Signed Separate Pledges, Not an Agreement
Previous Next

Kosovo and Serbia Signed Separate Pledges, Not an Agreement

Kosovo and Serbia have signed separate documents rather an agreement at the White House on Friday.

The respective leaders of each country are the single signatory each to a separate document, with the same content but the point on Israel, each titled “Economic Normalization” and each prefaced by a congratulatory note by President Trump.

It is unclear whether leaders provided each other with a copy of their respectively signed document. It is also unclear what kind of powers these documents would hold, beyond an informal understanding between parties.

The White House Summit of Kosovo, Serbia and the United States, failed to produce any bilateral or trilateral agreement.

Speaking to journalists on Friday, President Trump’s envoy for the Kosovo-Serbia dialogue Richard Grenell stated the US had signed no deal.

“[President Trump] signed a letter acknowledging that they are going to work together and do this agreement,” he added.

The choice of this unusual type of document to be signed by the parties has avoided any implication or interpretation that Serbia has recognized Kosovo. 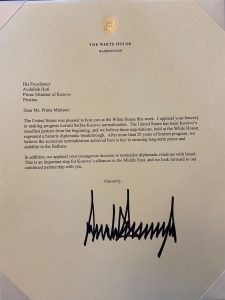 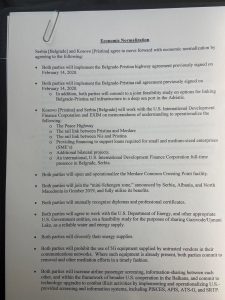 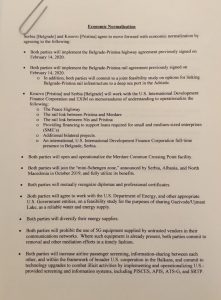 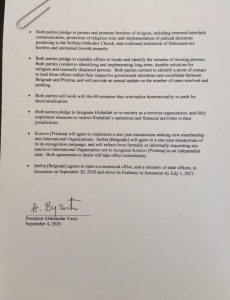